The RECYCLE ME project got recognition for our efforts to raise organ donation awareness through culture and design. Together we make a difference, organ donation includes us all.

organisations and medical profession in Sweden that works for organ donation awareness.

Read their motivation below.

Pamela Lindgren has been elected as the Honorary Member for 2016 of Livet som Gåva (Life as a Gift). The decision was taken by Livet som Gåva’s Executive Committee after all the nominations had been compiled and considered together. Pamela Lindgren is a designer and postgraduate student at the Chalmers University of Technology. For the past ten years, she has been profoundly committed to the task of getting more people to take a stand for organ and tissue donation, despite not having any vested interest in this issue.

Pamela Lindgren has designed silver jewellery and glass objects in the form of some of the organs that are possible to transplant. She has also initiated various activities with the aim of promoting organ donation. Her latest initiative took place during the Gothenburg Culture Festival  in August this year. Research is one of the interests dearest to Pamela’s heart, and the profits from RECYCLE ME sales are donated continually to the Foundation to the Memory of Professor Lars-Erik Gelin (Stiftelsen Professor Lars-Erik Gelins Minnesfond (www.gelinfonden.org) ) for transplantation re-search. Pamela Lindgren’s project RECYCLE ME is wellknown not only in Sweden but also in many other countries. Currently Pamela has started a cultural exchange between RECYCLE ME and a group of interested stakeholders in South Africa.

The motivation for the Honorary Award in 2016 is as follows:

”Through design and culture, Pamela Lindgren with her project RECYCLE ME has contributed

to increasing understanding for organ and tissue donation.”

Professor Lars-Erik Gelin on the occasion of the Gelin Symposium on the 7th October 2016 in Gothenburg.  The Diploma and a glass ship designed by Bertil Vallien were presented to Pamela Lindgren by Håkan Gäbel, the first person to receive the Award in 2003.

For Livet som Gåva (Life as a Gift)

Translated with great help from Margaret Myers, RECYCLE ME

A big thank you to our volunteers! 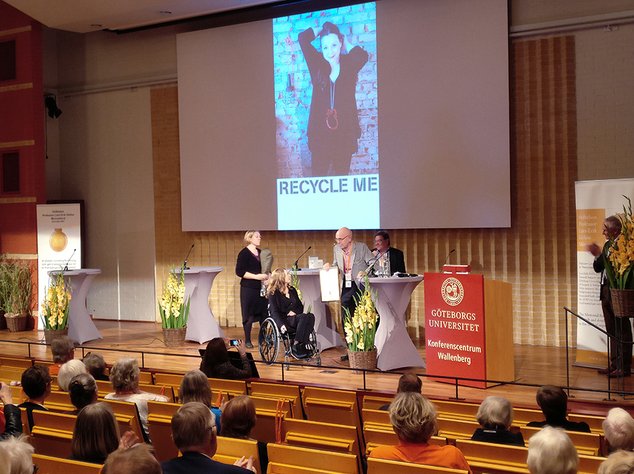 Recycle Me Life Copyright 2021 © All Rights Reserved. Our partners are;